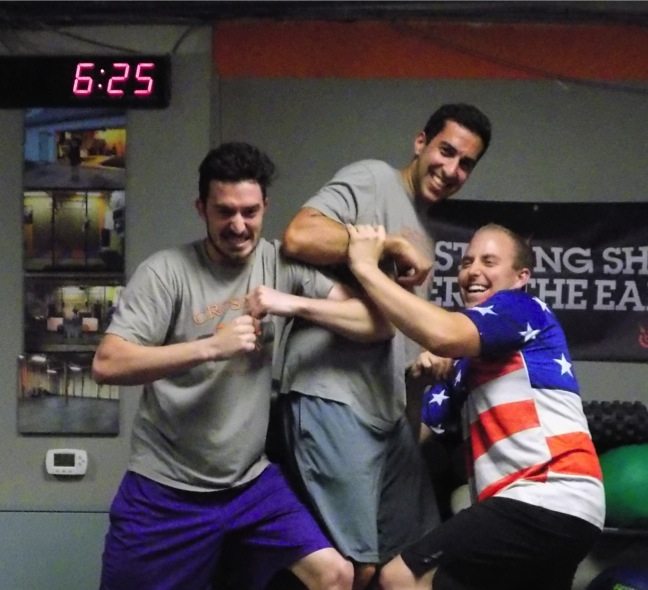 Q. What have been your greatest successes (physically,mentally or emotionally) since you began? How does your body feel now compared to when you started and WHY?
The ability to complete almost any workout at prescribed weight (minus Muscle-ups of course) has been one of my biggest accomplishments to date at Crossfit DNR. Also, the ability to bend over and touch my toes (something Kalen can not still do to this day) was something that I was not expecting to accomplish when I first started. I can truly say that my body feels substantially better now compared to my first day of cross fit when I was huffing a puffing during my first workout (Filthy Fifty) in the garage two years ago.

Q. How has your life changed since starting CrossFit training? Has CrossFit transferred over into any other areas of your life?
Working out at Crossfit DNR has pushed me to start and most importantly maintain a healthier lifestyle. Of course this did not happen over night, but today I try and eat paleo (minus brewery tours), run at least three miles multiple times a week, and stretch on a consistent basis; anything less then that and I would feel as though I was being lazy. If not for this gym I have full confidence in saying that I would not be anywhere, health wise, compared to when I worked out on my own regiment.

Q. What are the advantages of CrossFit style training compared to your previous workout styles?
When I came to this gym I felt as though I was in good shape, working out at a gym three to four times a week, oh how wrong was I. The mixture of strength and cardio in the same workout is unlike anything one can experience in a typical gym. Since I have started working out at Crossfit DNR, of course I have noticed an increase in strength, but the largest difference I have noticed has been my mental capacity to complete a workout with little to no breaks. Again, this is something that I would have never been pushed to do at a typical gym.
Q. What advice can you give to others?
Based on my own experience I would suggest trying to start crossfit with a group of friends. Of course each will be a little better in different aspects of the workout, but finding the workout that you are slightly better in makes the climb to fitness a much easier one. Also, an advantage of this strategy is that eventually you might have a better time than one of your friends in a movement that they are typically better than you in. There is no sweeter feeling than cheering on a friend in an workout that you both though they would beat you in.
Athlete Specific Q. Will Jeff and Kalen ever be able to compete at your level, ever?
Jeff and Kalen have the whole skinny thing going for them right now, which means that most of the time they can whoop me in body weight movements. If Kalen wants to compete at Matt Randall’s and my stature he will have to become more flexible then touching his knees when trying to touch his toes. As for Jeff, if he just keeps drinking that Oskar Blues beer all day he will be stocky enough to lift as much as I do someday. To be honest though neither one have my passion for running though so it seems as though there was no chance for them in that category. Each one of us have made great strides over the two past years, time will only tell who gets to that top spot on the podium.

Q. What have been your greatest successes (physically,mentally or emotionally) since you began? How does your body feel now compared to when you started and WHY?

A. Since I have began going to DNR my greatest successes would have to be my increase in the amount of weight I can lift. Growing up I played sports and was told to lift weights but I always became so frustrated because I never saw the improvements I wanted to after putting in so many hours at the school weight room. My body feels more “whole” in terms of my overall fitness and health since I began. By doing more compound lifts in the correct form I feel as if I’m getting the most out of the workouts and always feel accomplished at the end of a session.

Q. How has your life changed since starting CrossFit training? Has CrossFit transferred over into any other areas of your life?
A. Since starting crossfit training my life has changed for the better. I focus more on eating clean and staying active. Crossfit has taught me that I feel healthier and my body feels better when I focus on being overall fit and not just trying to “get big” when I workout. Crossfit has helped me eat better by cutting down the amount of processed foods I eat and instead eat more fruits, veggies and whole grains.
Q. What are the advantages of CrossFit style training compared to your previous workout styles?
A. The advantages of the crossfit style training out weight my previous workout styles immensely. Just the fact that crossfit focuses more on compound lifts than other more specified lifts is a huge advantage in itself. By doing these lifts more often, I have seen improvements in both the weight I’m putting up and the form in which I’m doing them. I also enjoy how some form of cardio is in almost every workout, it makes the workouts we are doing more relatable to sports being played or simply certain life situations that are done on a daily basis. I just wish I was doing crossfit while playing sports, I know for a fact I would have been a better athlete because of that.
Q. What advice can you give to others?
A. Advice I can give to others about crossfit is simply don’t be afraid to try it. I hear all the time that people want to “get in better shape” before they try it but as long as you’re willing to work hard and have an open mind about it then you’ll be fine and quickly see improvements.
Q. Will Tanner and Kalen ever be able to compete at your level, ever?
A. Haha well I’d say Tanner and Kalen are already out competing me, however because of this I’d say I compete harder in workouts to beat them (and sometimes I do).
Q. What have been your greatest successes (physically,mentally or emotionally) since you began? How does your body feel now compared to when you started and WHY?
I think my greatest success was developing proper form on every lift. When I first started CrossFit, I had terrible form on almost every lift. I wasn’t close to parallel when I did squats, I never touched the bar to my chest when I did bench, and my deadlifts were always straight legged. Kyle and Kody made me drop weight and develop form before strength. I really had to check my ego when I dropped down to 115# on back squat (which was the most I could do with proper form). However it has all paid off as I am up to back squatting 245# and now I have the mental confidence to do any lift knowing I have the correct form down.  I am definitely all around stronger than I was when I started as I have set lifetime PRs on every movement. I think this too can be attributed to me getting proper form on all my lifts because now I can confidently do lifts that I would not have done before CrossFit (deadlifts, cleans, snatches, jerks). All of these new lifts helped develop muscles that I was either not hitting or under developing before I started CrossFit.
Q. How has your life changed since starting CrossFit training? Has CrossFit transferred over into any other areas of your life?
I have always been very active when it came to sports and outdoor physical activities so CrossFit hasn’t really changed that. But I have met a lot of new people and made some friends since starting. I also met my girlfriend through CrossFit, so I guess I have CrossFit to thank for finding love.

Q. What are the advantages of CrossFit style training compared to your previous workout styles?
The high-intensity aspect of CrossFit is a serious advantage over regular lifting. Every CrossFit workout that I have done has gotten my heart beating faster than any lifting routine I ever did before, so you get the cardio benefits without the monotonous aspect of actual cardio workouts. I also enjoy how I can get in and out of the gym in an hour or less which helps me fit CrossFit into my daily routine.

Q. What advice can you give to others?

When I first started, it was really discouraging finishing last in the class or modifying the workouts more than everyone else. I always wanted to skip a few reps to lessen the gap between me and the others. But, you really have to compete with yourself until you can truly compete with the others. Modify as needed but do every rep and always keep pushing towards Rx.

Athlete Specific Q. Will Jeff and Tanner ever be able to compete at your level, ever?
I wish I could say no but the truth is we have all improved more than the others in certain areas. Tanner beats me in heavy lifting workouts and Jeff has me beat when it comes to box jumps and pull ups. But thats all I am willing to concede.