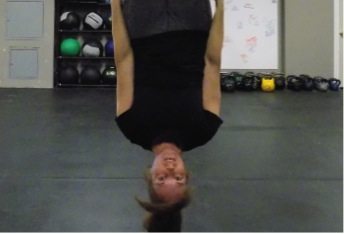 Q1. What have been your greatest successes (physically,mentally or emotionally) since you began? How does your body feel now compared to when you started and WHY?

My greatest success has been sticking with it.  I have definitely improved in form and weights – I thought I would never be able to do some of the moves and am very surprised that I am almost there on some (like pullups) and have actually achieved a double under (just a few).  Initially I struggled with feeling like I was the most out of shape person there and that I would never even come close to what other people could do.  I was so sore the first few weeks and always the last one to finish and that was hard mentally.  No one wants to be the slowest.  Without the encouragement of the trainers I’m not sure I would have stuck with it.  Kyle and Kody and the other trainers seem to have perfected the ability to encourage me when I really need it and push me when I just don’t feel like it.  At first I needed a lot of reassurance that I would someday be able to do some of these things and would not always finish last. I totally  didn’t believe them but
appreciated their willingness to lie to make me feel better.  I felt like I was too old and out of shape to ever really get anywhere and thought they just felt sorry for me. Shockingly they may have been right (every once in a while a man is right and I am wrong but not very often).  Luckily I am really freakin stubborn so I lasted long enough to start to see it happen.  As for physically – the first two weeks I couldn’t climb up stairs without repeating F@$#%ing crossfit multiple times and of course I was assured that in time that would pass also (again I was sure they were lying).  But after the first month I found that I was sore but not so sore that I was cursing Kody all day (didn’t matter who was coaching I just blamed it on Kody).  Instead I felt as if I had had a good workout but found that I had tons more energy and could go to more workouts every week.  Last week I woke up and my lower back hurt a little and I realized that I had not had that
happen in months.  It used to be an almost daily occurence.  My body feels more balanced and flexible and a lot of the chronic pains that I had attributed to being over 40 (truth’s out – I know you all thought I was in my 20s) – were really just a product of being out of shape and out of balance. Of course the best part is that I have lost 25 pounds and so of course that makes me feel all around better.  I have to look good for the 2016 calendar!

Q2. How has your life changed since starting CrossFit training? Has CrossFit transferred over into any other areas of your life?

I have always WANTED to be athletic but…..  There is a long list of buts – I’m old, I’m just not the athletic type, I don’t look good in work out clothes, I don’t have time (I’m a very important person in case you didn’t know) etc etc.   Since starting crossfit I feel so much better that it has become a priority and I have found that I actually do have time when I make time,  of course I now look totally hot in work out clothes (well better anyway) and I feel so much better that I can’t imagine not doing that.  I feel so much better that I started going back to yoga so I could stretch those muscles that I didn’t know I had and in general I am so much more active.  The last couple years I have tried to train for a marathon but always injured myself when I would get to the long mileage.  I think that my body was so out of proportion – running was the only thing I did and after injuries or between races I would do nothing.  So I was always in pain
and always got injured.  I am hoping that this year will be a different story.  I also feel like I am  more productive during the day because I have so much more energy.  My 22 year old student that works with me says that I walk “freakishly fast” and have “way too much energy”.

Q3. What are the advantages of CrossFit style training compared to your previous workout styles?

The biggest advantage of crossfit is that it works all the muscle groups because the movements use your body weight and engage more than just one muscle.  A million years ago, when I was in shape,  I did regular weight training at the gym every day and I wasn’t working anywhere near as hard as I am now and never really saw the benefits that I am seeing now. I was doing different exercises for different muscle groups but never using my whole body.  Crossfit  truly is the best overall body workout that I have ever seen.  I’ve had people who have never gone to crossfit tell me that “crossfit is dangerous and you will get hurt” but I’m not sure where that information comes from.  I have never seen a workout class where so much attention is paid to correct form.  I never feel like I am in danger of hurting myself because I know if I am doing it wrong someone will tell me and correct it.  I feel like I have never had anyone really show me the correct way
to do exercises to build strength and muscle and that is probably one reason why I never saw much benefit from it.  I love how crossfit incorporates strength exercises with cardio and movement.  I feel like it is the best way to make sure that you build up strength not just in one muscle but all the muscles needed to support stregth and mobility.

Q4. What advice can you give to others?

My advice would be don’t give up and be consistent.  I really wanted to give up after the first month but I didn’t.  I also feel like I see the most improvement when I am going consistently several times a week – I try to make 4 classes a week – sometimes I do 3 and sometimes I do 5 but I always go.  Also don’t get discouraged if you feel like you can’t do anything right at first.  Even if you don’t think so – it will come with time.  So just make fun of the people who can do the movements perfectly with a lot of weight and then you will feel better about yourself.

Athlete Specific Q. On average, how often and how late are you to each workout?

Question you didn’t ask me but I will answer anyway – What’s my favorite thing about Crossfit DNR?  One of the reasons that I love coming to class is that everyone is so fun and great to be around.  I have never gotten anything but encouragement from everyone there – from staff (which they are paid for ) but also tons of encouragement from other members (I don’t think they get paid for it).  Even the elite athletes there are just as quick to help me out and tell me I’m doing a great job – no one is in the least bit judgemental.  No one acts like they are better because they can deadlift 500# (a tiny bit less than I can do).  I really appreciate that.  My other favorite thing is that the coaches clearly really know what they are doing and I completely trust them.  I know they will watch me and keep me from doing something that would injure me.  I also like that no one (so far – that I know of anyway…) gets insulted by my (occasionally off color) sense of humor and comments.  I appreciate that you all laugh at my jokes even when they’re not funny (but they usually are).