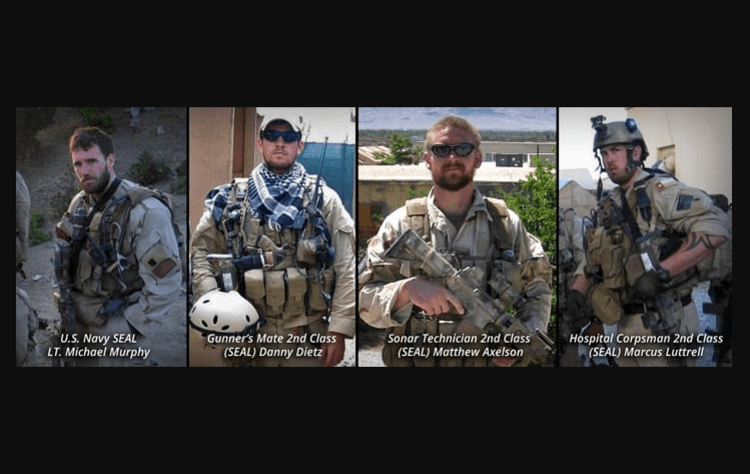 On June 28, 2005, a team of four Navy SEALs, tasked for surveillance and reconnaissance of a group of structures known to be used by Ahmad Shah and his men, fell into an ambush by Shah and his group just hours after inserting by fastrope from an MH-47 helicopter in the Hindu Kush of Afghanistan.
The team members were team leader Navy Lieutenant Michael P. Murphy of SEAL Delivery Vehicle Team 1 (SDVT-1), based out of Pearl Harbor, Hawaii; Petty Officer Second Class Danny P. Dietz from SEAL Delivery Vehicle Team 2 (SDVT-2), based out of Virginia Beach, Virginia; Petty Officer Second Class Matthew G. Axelson from SEAL Delivery Vehicle Team 1 (SDVT-1); and Navy Hospital Corpsman Second Class Marcus Luttrell, of SEAL Delivery Vehicle Team 1 (SDVT-1). After moving to a pre-determined, covered overwatch position, from which the SEALs could observe the Named Areas of Interest, the team was discovered by local goatherders. After determining that they were civilians, and not combatants, Lieutenant Murphy had them released, as was protocol in the area of operations at the time, according to rules of engagement.  Three of the four SEALs were killed in an ambush; a quick reaction force helicopter sent in for their aid was subsequently shot down with an RPG-7 rocket propelled grenade by one of Shah’s men, killing all on board; 8 Navy SEALs and 8 U.S. Army Special Operations aviators.