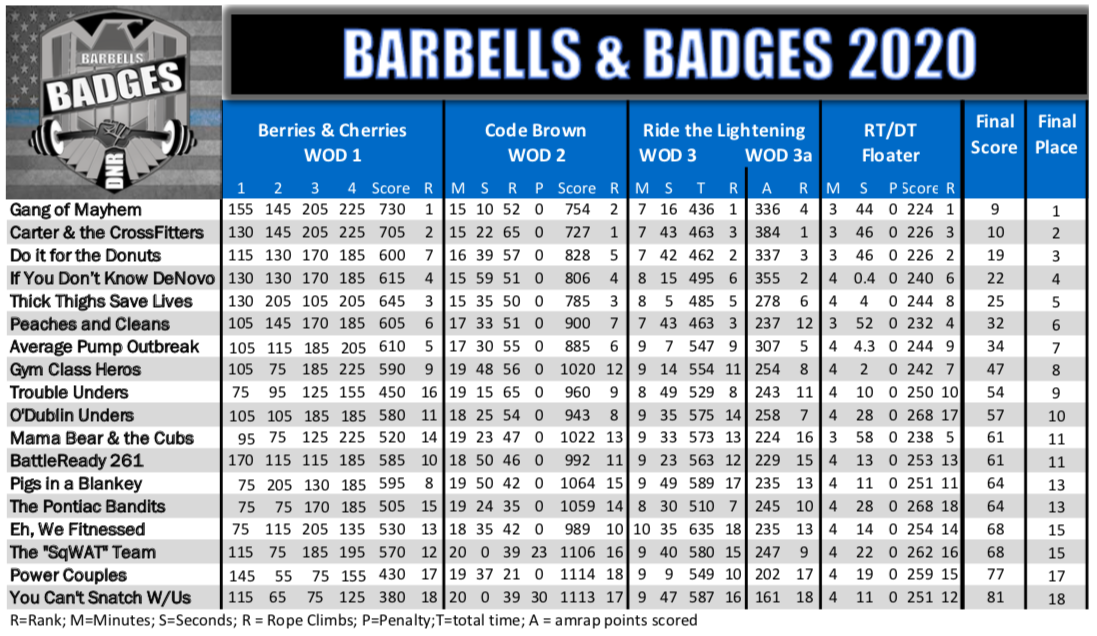 Click the link to register for the 3rd Annual Barbells and Badges Fundraiser Competition.! 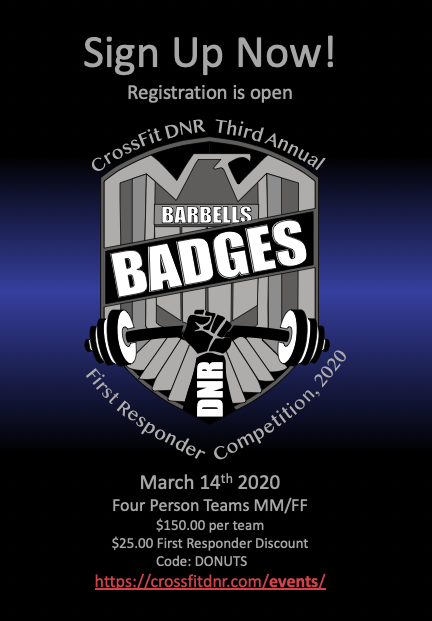 Welcome back to the 3rd Annual Barbells and Badges!

This competitions is a fundraiser for the Fort Collins Police Departments Benevolent Foundation, 100% of the proceeds goes straight to the 501(c)3 non profit!

Come and fight for your team at one of the most epic competitions of the year!

This is your chance to prove who has the fittest fans, with the greatest school, city, and team pride. It’s time to prove your worth, back up all of the sh** talking, and silence the other side.

On Saturday March 14th at CrossFit DNR in Fort Collins, Colorado, we stand united and support the thin blue line as up to 24 teams will go head to head in 4 fun filled WODs.

$150 / Team (2 Male / 2 Female)
Registration is LIVE!
25% off First Responder Discount Code: DONUTS (note you must show First Responder I.D. the day of competition if you use this code)

All Teams will receive:
Competition Shirt (must be signed up by Feb 28th to receive a shirt) 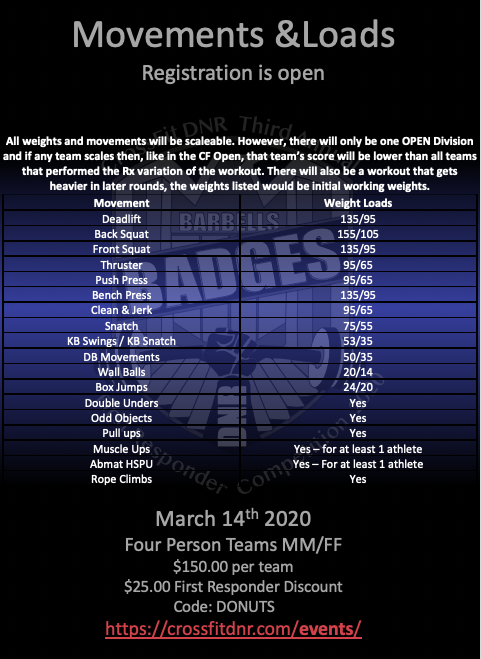 A Huge Thank You To Our
Event Sponsors! 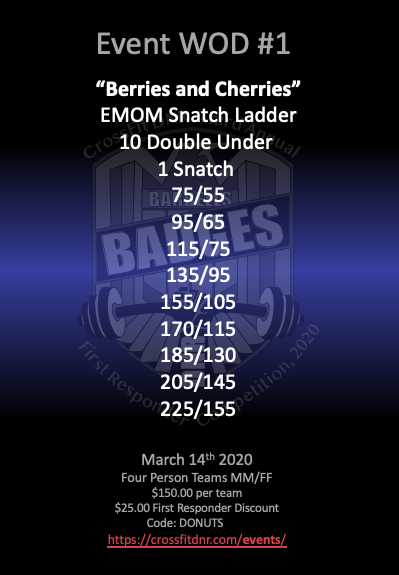 workout:
At the call of “3-2-1 … Go!” athletes will have 50 seconds to perform 10 double-unders, and then one snatch. There is a 10-second “reset” time, so the athlete rotates every minute. NOTE: 10 single under can be performed as a scale, a 10lbs penalty will be applied to athletes heaviest lift i.g. 135lbs will be reduced to 125lbs if athlete performs single under.
At each station, the 10 double-unders (scale of single under) must be completed prior to attempting the
snatch. The snatch must be completed before the 50 seconds are up. The athlete
remains at that station until the call of “rotate” at which point he or she will move to the next station and begin the double-unders. If the athlete does not successfully snatch the barbell within the 50 seconds, he or she does not advance to the next barbell. If an athlete fails a snatch attempt they will be granted two more attempts within the :50 period.

The athlete’s score will contribute to their teams total weight / score. There will be no tie breaks for teams with the same total. 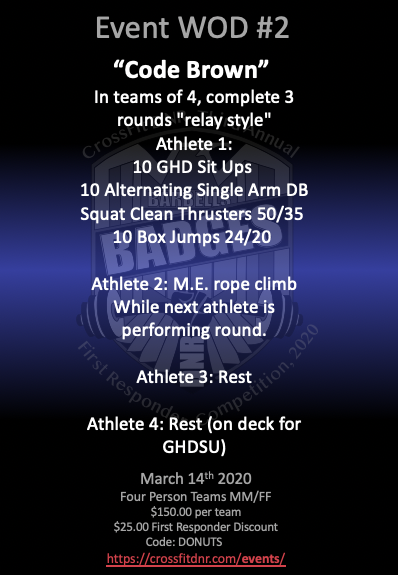 In teams of 4, complete 3 rounds “relay style”
20 Min Time Cap
Athlete 1:
10 GHD Sit Ups
10 Alternating Single Arm DB Squat Clean Thrusters 50/35
10 Box Jumps 24/20
Athlete 2: M.E. rope climb While next athlete is performing round.
Athlete 3: Rest
Athlete 4: Rest (on deck for GHDSU, etc)
**Each team member cannot start the next round until the last team member finishes the prior round. Each athlete will complete 3 rounds. Once the athlete has performed a full round, the athlete behind them can start working. Athlete 1 will then perform as many rope climbs as possible before athlete 2 finishes their round.
At 3-2-1 Go, One athlete will perform a full round of GHD Sit Ups, DB Squat Clean Thrusters, and Box Jumps. While that athlete is performing a full round, another athlete will be completing as many rope climbs as possible. The teams other two athletes will be resting. When the first athlete completes their round, they will then rotate to rope climbs and the athlete who was previously climbing will rotate to rest. One of the athletes who was resting will then begin GHDSU. The entire team will continue to rotate through in the same order until all 4 athletes have completed 3 rounds each or the team caps at 20:00.
Scoring – This workout will be scored “For Time” after all athletes complete 3 rounds each. Every rope climb achieved by the team will reduce the teams time by 2 seconds (*if athletes can not rope climb it will not count against the team). If a team caps out and does not complete the full workout then 1 second will be added to the teams time for each rep missed.
Ex: If a team completes the entire workout except for the final 10 box jumps then they would have a 10 second penalty added to their time but the rope climbs would still reduce their overall time.
Workout Flow: 1 Athlete at each station
Working Round (GHD, etc) – > Rope Climb -> Rest -> Resting (on deck) -> Working Round
Movement Standards:
GHD Sit Ups – all athletes will be required to touch the same target (bumper plate) at the bottom and foot pads at the top for each rep to count. The athlete can adjust the GHD and be seated waiting for their partner to finish a round so they can start immediately.
Alternating Single Arm DB Squat Clean Thrusters – The DB will start with both heads of the db on the ground from between their feet. Athletes will then perform a single arm squat clean thruster. After finishing a rep, they MUST alternate to the other arm (below eye level) and the db must touch the ground with both heads prior to starting the next rep. 5 reps / side for a total of 10
Box Jumps – Athletes need to show full extension with control at the top of each rep. Step ups will be allowed as an Rx movement.

“Ride Together, Die Together” 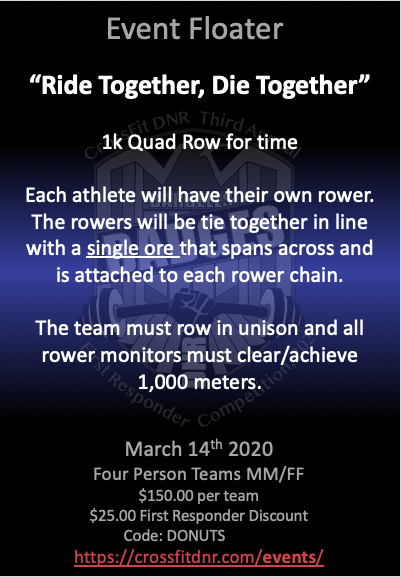 1K Quad Row 6 Min Cap.
Each athlete will have their own rower.
The rowers will be tie together in line with a single ore that spans across and is attached to each rower chain.
The team must row in unison and all rower monitors must clear/achieve 1,000 meters.
One second will be added to time for every meter under the 1,000.
For example: one rower is at 950m when the 6 min cap hits, then 50 seconds will be added to the 6 mins giving the team a time/score of 6:50 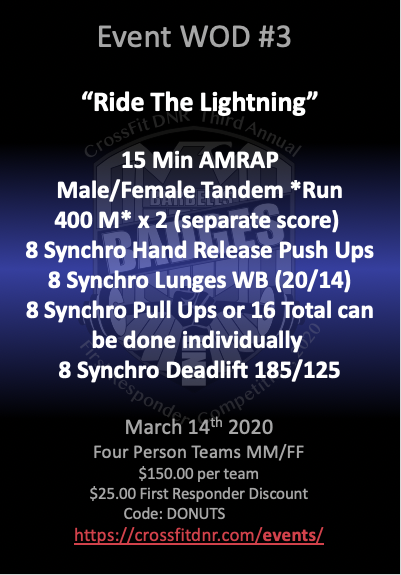 This workout will have 2 Scores associated, WOD 3 & 3a.
WOD 3 will be scored as a “For Time” event. Your team of 4
will divide into 2 pairs of 1 female & 1 male. Two partners will
begin this workout by performing a 400 M Run TOGETHER
(If we have poor weather 15 synchro burpees will replace the 400m run),
while your teammates begin
accumulating reps at “WOD 3a”. Upon completing the run,
both pairs will trade places. Teams will complete 2 rounds of
this for each pair (800 M / athlete pair). Your score will be
the time that the team’s pairs complete 2 full rounds each.
WOD 3a will be scored as an AMRAP.

At 3-2-1 go,
one male and one female athlete from your team will perform AMRAP; 8 reps of
each movement in synchro. After the other pair finishes their
first 400 M tandem run, the two pairs will switch and continue
accumulating reps in the AMRAP. After both pairs complete
2 rounds of 400 M, then all 4 athletes will be able to alternate
and switch as desired. This means that pair one male can
team with pair two female and vise versa for the remaining
15 minutes (must remain in a male/female pair).

Synchro Hand Release Push Ups – Performed with hands
and feet on #35 plates. Partners must be in sync with chest
on plates and hands off at the bottom, as well as at the top
with arms locked out.

Synchro Reverse Lunge Wallballs – Athletes will perform a
reverse lunge and at the top of the lunge, throw a medball to
a 10/9’ target. Alternating legs each rep for a total of 8
(4/leg). Athletes must be in sync with their knee on the
ground as well as with medballs meeting their target at the
top. If athletes miss their target or complete the rep out of
sync they will be no repped and perform another rep on the
same leg.
Pull Ups – 16 reps must be performed each round. This can
be done by a single athlete or alternating for a total of 16. It
can also be achieved by doing 8/athlete in sync to move
quicker. Chin over bar in sync and fully extended in the
bottom position in sync.

Deadlifts – Athletes will begin in sync with weights on the
ground and finishing each rep in sync at the top locked out
position on separate barbells. Hips, knees and ankles fully
locked out at the top.